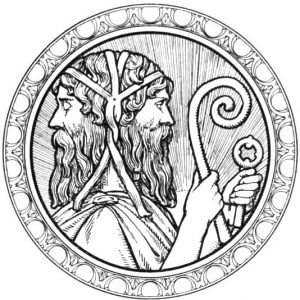 Tradition has it that the the month of January is named for the Roman god Janus, usually depicted with two faces, looking both to the future and to the past. And New Year is traditionally a time when we look back at the year just past and forward to the year to come, a time for new beginnings and resolutions for future action.

This year we face a major challenge in the maintenance of our church building as we look to raise money to repair the leaking roof. And at the same time we want to focus on our Mission Partnership with Lee Abbey in May. The story comes to mind of a tourist asking directions from a local in Ireland, who pauses for a while, sucks in his breath and answers, ‘well if I were you sir, I wouldn’t start from here’.

It’s tempting to look back to a time when things were easier and wish we could be back there again. I wrote in a previous post about the importance of looking forwards rather than backwards, and I’m reminded of St Paul’s appeal to the Philippians:

forgetting what is behind and straining towards what is ahead, I press on towards the goal to win the prize for which God has called me heavenwards in Christ Jesus.Phil 3:13-14 NIV

Jesus, now lead us – from where we are to where you need us; from the security of what we know to the adventure of what you will reveal.Iona Community communion liturgy

The call is from where we are right now, not from where we wish we were. So as we begin a new year, let us be resolved anew to listen for God’s call and follow it wherever it leads.