Where did they bury St Edmund? 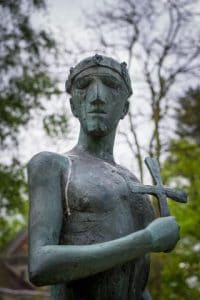 The last time St Edmund’s bones needed to be located, things were rather easier. On that occasion his severed head, held aloft by a wolf, called out, “Here, here, here”, and his followers found him and collected his remains together for a decent Christian burial.

This time, in the absence of friendly wolves, St Edmundsbury borough council in Suffolk has had to rely on the assessments of archaeologists and a plan to dig up a tennis court that was once an abbey graveyard.

After the discovery of Richard III beneath a car park in Leicester, the council believes that there is a good chance his 9th-century predecessor, the former patron saint of England, could be the latest monarch to be given a proper grave once more.

“It would be an incredibly important historical discovery if he were found under there,” Robert Everitt, a borough cabinet member, said. “It is something the borough wants to do and the cathedral is in agreement as well.”

With the backing of local heritage officials, it now seems likely that the archaeologists will begin a dig. They are looking for a metal chest rumoured to contain the bones of a man who was once the most revered saint in England.

St Edmund, king of the East Angles, has had almost as exciting a time in death as in life. During the 9th century, according to chroniclers, he was faced with the Viking hordes. Rather than fight them, when cornered by the fearsome Ivar the Boneless, he chose to meet him unarmed. That was when his legend began. “He wanted to match the example of Christ, who forbade Peter to win the cruel Jews with weapons,” Abbo of Fleury wrote. “Lo! the impious one then bound Edmund and insulted him ignominiously, and beat him with rods, and afterwards led the devout king to a firm living tree, and tied him there with strong bonds, and beat him with whips.”

Things got even worse for poor Edmund after that. Shot with arrows and beheaded, his remains were scattered about the woods. Thanks to the wolf, and his spirited post-mortem shouting, his body was collected together. What’s more, after being transferred to another site, monks found that the head had miraculously reattached itself.

With such a story it is not surprising that he gained a following, becoming de facto patron saint of England. In the 11th century his remains at what is now called Bury St Edmunds became an important pilgrimage site, occasionally shifting to London to avoid Viking attacks.

But while he could survive Norsemen, he could not resist the Reformation. Under Henry VIII, the site of the grave was lost — and what happened next is conjecture.

“The commissioners who dissolved the abbey on November 4, 1539, mentioned nothing about the body, and given St Edmund’s royal status it is likely that they would have quietly allowed the monks to remove the body from the shrine and relocate it,” Francis Young, a local historian, said.

Even so, he thinks that the tennis court is a very good bet.

“According to a third-hand account from 1697, St Edmund was placed in an iron chest by a few monks but sadly the account doesn’t give the location within the abbey precincts where he was buried,” Dr Young said. “On balance, however, the monks’ cemetery is the most likely location.”

Whether he really is there, though, depends on a millennium-long chain of events that includes invasion, exhumation, reformation and desecration — and that helpful wolf.